Wow, it's been a while since I posted. And absolutely nothing new has happened on the home front. Well, except that I am temporarily on an extended release version of one of my bipolar meds, and I'm afraid this med change is what led to me being rather depressed on Saturday. Been a while since I have been depressed like that. Looking back at it, I can tell it is different from normal feeling down or blue. Of course, it's hard to explain if you have never gone through it. I guess you could say it takes over your whole life. You don't feel like doing anything but lying in bed and crying.

The med change was an unfortunate result of the fact that, due to issues with getting temporary disability from Mr. BTEG's employer, we have no health insurance, and one bipolar med in particular is rather expensive. My primary physician is helping me out until we hopefully get some free pills from the pharmaceutical company. Mr. BTEG has also had to skip one of his infusions to slow down his immune system, and it is showing. BTW, when I said in my previous post that things could be straightened out in a day, I meant that things could work out in *as little* as a day. As it is, I hope things will come together by the end of this week. Otherwise we will start having serious issues to deal with.
Posted by Barb the Evil Genius at 1:09 PM 2 comments:

Right now, Mr. BTEG is having problems with his health that are affecting his job. He's not dying or anything, but he's having fatigue problems that haven't yet been fully explained. In the meantime, everything is up in the air. It's hard for me to take an interest in much of anything else while these issues are going on. Things can, and hopefully will, improve in a day or so, but in the meantime, I feel like we're in limbo. It's hard to complain, because we have every sign that things will improve, but until they actually do, there's a feeling of emptiness.
Posted by Barb the Evil Genius at 7:34 PM 2 comments:

Even before Mr. BTEG and I had kids, I had plans to be "the cool mom." I wanted to be the mom all the kids liked, and I wanted to have the home where all the kids wanted to hang out. This has its advantages. You not only have a much clearer picture of what your own children are doing when they are doing things in your home, but you don't have to worry as much about what your kid's friends' parents are like, and what sorts of things they allow in their homes. Plus, I want my children to be able to confide in me, not another mom who appears "cool" but who may have ideas with which I do not agree. I wasn't eager to necessarily be the mom that other kids besides my own came to for advice. I do see worrying tendencies in some of the Equestrienne's friends, but that is a whole other post, if I write it.

After the party we had for the Dancer this past Saturday, however, I have finally become convinced that I do not have the personality to be "the cool mom." I dislike a lot of noise and commotion, and hate sensing that things are out of control, or at least that they are not going the way I had planned. The Dancer had a very nice party. The house was adequately clean ahead of time, the games and favors were planned out and prepared, and the refreshments were acceptable. However, at one point I went into our pantry and shut the door and took a little "time-out" because I was overwhelmed by the noise and exuberance. (Mr. BTEG was still there to supervise.) I also felt incapable at times of being in charge of the group of girls. This same problem has occurred when I have tried to be a teacher, or a Girl Scout leader. I don't feel capable of what I feel is the necessary "command" and firmness when dealing with a group of kids. You can do your own psychoanalysis of me as to why this is so. ;)

However, "knowing is half the battle." I've spent a lot of time with a counselor in the past working on another part of the battle, learning not to think negatively or have distorted thought patterns about myself. So as I let go of being "the cool mom," I can still find ways that do suit me to support my children and their friendships. And make sure I always have back-up at parties!
Posted by Barb the Evil Genius at 8:38 PM 3 comments:

I don't know exactly why this unfolding story here in Cleveland strikes me as interesting, except that it shows first impressions are not always the right ones. A house exploded in a Cleveland neighborhood, damaging almost 60 homes. At first, fingers were pointed at the gas company which came out to the building that exploded to turn off the gas a day or two prior. But things have gotten intriguing now that police have revealed that a next-door neighbor who complained about the empty building was convicted twice of arson in another state, and plead guilty once for burning down his house for the insurance money! He is currently being charged with deliberately creating the explosion in this home.

I also wonder what society does with people like this. I hope at least that if this man and his wife had insurance on their current abode, that the insurance company did a background check and was charging an exorbitant fee, although somehow I don't see it. There's no consolation for the many people whose homes suffered damage because of this man's alleged reckless action. I'm wondering if he shouldn't get prison time for life if found guilty. Why trust him again?
Posted by Barb the Evil Genius at 11:07 AM No comments: 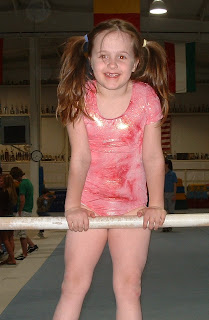 Today is the Dancer's birthday! This picture is from the days when she was taking gymnastics. After she was found climbing the refrigerator, one foot on either side of the handles, and because she was constantly climbing the shelves to get to the top of the pantry, I knew she needed some outlet for her energy. Later on, she decided she preferred to dance, and she has been ever since.

I'm still convinced she was turning somersaults in the womb, which caused her to move from her head down position, to sideways, thus necessitating a C-section.

Happy birthday, my sweet Dancer!
Posted by Barb the Evil Genius at 11:47 AM 2 comments: