Since we've been talking about learning, I've been wanting for a while to talk about our real-life lesson in butterflies, and this post gave me the impetus to do it. Once again, this author is one of those completely down on public schooling; this line, particularly, "fill the void left in the child's heart after the state forcibly curtails the intellectual adventurousness of the wandering bug-studier, stargazer, or bookworm," made me think of our family's short adventure with Mona the Monarch.

It was early October of 2005. We were at one of the local outdoor malls on one of those days when winter is drawing closer to its appearance; it was cold and rainy. While we were walking, we saw a monarch butterfly on the sidewalk looking completely bedraggled. We found a cup in our car, and once the butterfly got into the dryness and warmth of our car, she immediately came back to life, fluttering around wildly. We decided we didn't want to turn her back out into the cold and damp, so we took her home and temporarily let her free in our bathroom, where she had room to fly. We had stopped on the way for a better temporary carrier for her, and some hummingbird food, the best thing we thought we could provide to nourish her. We did some research to discover that Mona was indeed a girl monarch, and that butterflies drink with their long tongues, and taste with their feet. Here you see Mona checking out the hummingbird food. 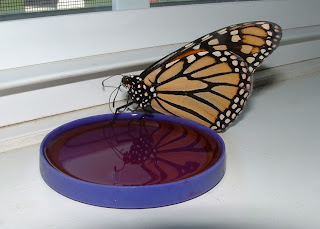 I contacted via email a group involved in tracking the yearly migration of the monarch butterfly, and was told that Mona could still make it to Mexico if she was released. So we simply waited a few days until the weather was sunny, and warm enough, and set her free, after a few pictures to remember her by. 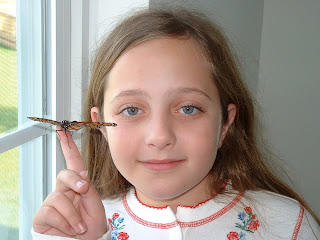 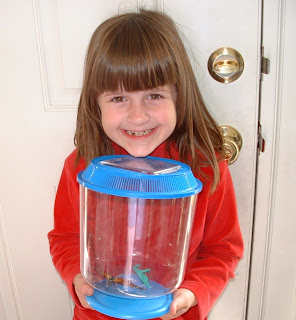 She flew right up into the sky until she was over our house, and then headed almost due south. We like to think that she did indeed make it to Mexico, and that her descendants are still flying around somewhere.

What really brought her to mind was a comment that the Dancer made about a month ago. She is excelling in her math and science classes, and is taking Honors Geometry and Honors Biology in high school, next year, so we're not ruling out a STEM career of some sort in her future. She mentioned that she might want to have a job studying butterflies, because of her experience with Mona. That surprised me, because of how long ago our butterfly adventure took place, but it made me happy that it had left such an impression on her.

Tying it in to the article above, however, the author asserts that public school will kill the enthusiasm of the "wandering bug-studier." Granted, we were homeschooling when this all took place, but it was completely extra-curricular and spur of the moment. We could have done all of the above even if the girls were attending a public school, especially since we discovered Mona over a weekend. And the kids that my girls were friends with before we started homeschooling would at the very least not have shot down their interest. They might have thought it was interesting themselves, even if they would not have enjoyed the experience so much. The Dancer had even done a very simple "lesson" on butterflies in her preschool class.

I hate to see myself becoming an advocate for public schools, but the continuous stream of articles describing public school as nothing ever but a soul-sucking waste, make my contrarian nature want to respond that while public school is not perfect, it is in no way one hundred percent the same for everyone, everywhere. I'll probably respond more to this article in future posts, but this one was mostly to use as a jumping off point for another adventure in learning that I wanted to share.

Posted by Barb the Evil Genius at 7:29 PM 2 comments: Links to this post

There has been much excitement and activity here since a few weeks ago when the Dancer's dance teacher first suggested that she was ready to start work in ballet en pointe. The first step was simply trying to go en pointe in a pair of borrowed shoes. She found that to be no problem. Next was a trip to a podiatrist to get an x-ray to make sure that her feet had stopped growing so that she won't do permanent damage to them. The doctor was happy with how everything looked, so then came finding a time to get to the dance wear store and get the Dancer her own shoes. Next was me sewing the ribbons onto her new shoes, and her showing off the shoes to her dance class last night. I have to figure out exactly where to sew the strips of elastic and take care of getting those on. She'll start working en pointe probably next week. She started this process all the way back in 2006, by her own choice. It's fantastic to me that she has kept at it this long, and that she is now starting on a whole new part of her dance years. These are the things that make watching your children grow up, worthwhile.
Posted by Barb the Evil Genius at 6:09 PM No comments: Links to this post

So now scientists are saying that as early as 28 eight weeks gestation, babies may be able to tell different syllables apart. We learn more and more about the unborn, and about infants, and what they are able to perceive and learn. And yet there are people still defending Kermit Gosnell, an abortion practitioner going on trial, who among other atrocities killed viable infants who survived abortion. Don't go over to that link unless you want your stomach to turn.

I've grown to understand the mentality of a society that on the one hand continues to learn more and more about how complex even the unborn are in their ability to learn and process information, and on the other hand looks the other way when those same miraculous creatures are killed in horrific manners and body parts preserved in jars. The truth is, not only does evil exist, but too many people have been so swayed by emotional appeals that they overlook evil. Certainly, gruesome abortion details do create an emotional reaction on the other side. But go beyond that and think about why an unborn child deserves to be killed at all, and all of the ways to kill the unborn are pretty gruesome, when even science is telling us how, dare I say it, human, these little ones are?

Posted by Barb the Evil Genius at 12:02 PM No comments: Links to this post