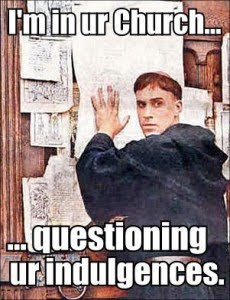 I stole this picture from Dan, who apparently stole it from someone else. :) I like it, in any case. Hope my Catholic friends can at least appreciate the humor. :) If you like LEGO, there are also two Luther-themed LEGO depictions of his life, here and here.
Posted by Barb the Evil Genius at 1:16 PM 2 comments: Links to this post

Okay, knitters, where do you go when you are looking for a pattern for a specific item? If I was looking for a sewing pattern, it would be easy, but I don't know much about the world of knitting yet.
Posted by Barb the Evil Genius at 10:19 AM 9 comments: Links to this post

Their conference on breast cancer, held in Egypt, is a no-Jews allowed zone. Yet Egyptian officials at the event continue to brag about world unity. Don't you mean, world unity once Iran nukes Israel? And are Jewish doctors in the United States paying attention? Or is everyone still pretending everything is fine?

The girls are really getting settled into their new schools. Not only in regards to making friends, but also as far as their studies. They're rather like me in regards to their schoolwork; there are some classes they are breezing through and others that they have difficulty with. I'm not sure about Mr. Evil Genius' career as a student except that he will not do his best for you if you bore him. Perhaps he will chime in here. :) The Dancer made an interesting comment. Basically, she does her best school work at school because it feels like school. Despite the fact that she had been homeschooled for five years, apparently she still felt like an institutional school setting was "real" school. Or something like that. All the kids she knew at church were homeschooled, but she saw the kids in our neighborhood(s) far more often, and they all attended some sort of formal school. Perhaps that influenced her thinking.

The girls are also quickly becoming bonded to our new locale. School probably has a lot to do with it, but I am amazed at how quickly they have come to feel this is home. The Equestrienne likes going to high school football games, and although most of that is likely related to opportunities to socialize, she does seem to be turning into a loyal backer of her future high school. The Dancer likes to spot all the signs in people's front yards that indicate that a local sports player lives there. She also wants a shirt featuring the school colors, like most of the kids at her school have.

I also am settling well into our new home. A bigger kitchen makes it much easier to do real cooking as opposed to just throwing something frozen into the oven. Not being crowded in makes it much easier to mop and vacuum. Our much bigger laundry room makes it easier to sort laundry piles. We really did try to take care of our previous abode, not wanting to perpetuate the negative stereotype of renters, but it did become very difficult due to lack of space. Of course, my husband will tell you I can feel guilty about just about anything, but I do wonder if I could have tried harder at our old place. But it's in the past, where it should stay. :)

ETA: In fairness to myself, I should also note that halfway through our time at our old place is when I was hospitalized because my bipolar got out of control. This didn't help anything!
Posted by Barb the Evil Genius at 11:47 AM 4 comments: Links to this post

I've been doing a lot of thinking since reading at Laura's about the homeless American Girl doll. This doll has been out all year, but her being homeless is never mentioned in the description of the doll in the catalog or online. One has to read about or watch the movie about the main doll of this year's three-doll Doll of the Year set, in which Gwen the homeless doll is included, to find out the backstory, it seems. Probably why it took so long for outlets to latch on to this news.

Most people who objected to the doll took issue only with the fact that no proceeds from this particular doll went to help the homeless, although American Girl the company does apparently support various charities. I think there is more to it than that, however. Of course, every historical doll in the American Girl series has a "message;" all stories convey some sort of overall meaning. For Addy, the escaped slave from the 1860s, the overarching lesson learned was obviously about the suffering incurred with slavery, although being for young girls the books do not go into details of beatings and so forth, but more about how the family is temporarily broken apart as they escape to the North. Through Samantha's best friend, Nellie, girls can learn about some of the hardships of factory life at the turn of last century and how even children had to work to support their families. However, these were historical themes, and the main idea behind the dolls was to teach girls about history and how girls of long ago were not that different from girls of today. Now American Girl seems intent on turning their line of dolls into After School Specials, with a Very Special Message for every one. Do we need a toy company to teach our children that Being Homeless Is Sad and We Should Help Our Homeless Friends? My daughter retches every time she sees the commercial on the Disney Channel about some sort of environmental crusade that viewers are urged to take part in. More of that self-congratulatory We're So Special and So Concerned That We Will Come Together and Fix Everything. Do they feel the yoke of sin and choose this to try to expediate their guilt? Do they need to feel better about themselves?

Also concerning, as I scanned American Girl's site for information about Gwen, is that the Kirsten doll is being discontinued. This will make two dolls from the original set of three to be canceled, as the Samantha doll and all her things are long gone. Is American Girl going to phase out every historical doll and just become about dolls of today? How sad that the original vision of Pleasant Rowland is being swallowed up. I definitely will not be interested in buying anything more from this company. We'll have to get the things the Dancer wants for her American Girl doll from other sources if possible.
Posted by Barb the Evil Genius at 11:28 AM 2 comments: Links to this post

I'm definitely not the first person to look at our current times as being similar to the state of Europe in the late 1930's. Living on the edge of a precipice, about to get pushed over, powerless to do anything about it. Does anyone else ever feel scared? Wonder what we might have to live through? No, I don't usually indulge in these feelings. Only sometimes, when I wonder how much more insane things can get. Wanting to know I am not alone.
Posted by Barb the Evil Genius at 11:27 AM 5 comments: Links to this post

Things That Make You Go Hmmm

While out and about the other day, I saw a bumper sticker for breast cancer that really gave me pause. It said, "Everyone deserves a lifetime." My first thought was, everyone? Really? What about all the millions of babies that have been aborted? Don't they deserve a lifetime too? Why does someone with breast cancer deserve life more than someone with Down's Syndrome, or even someone who could be born perfectly healthy, had he not been conceived at an inconvenient time? Also ironic is that the Susan G. Komen Foundation, which raises funds for breast cancer research, also financially supports Planned Parenthood. I guess they don't really believe that everyone deserves a lifetime.

While searching through breast cancer paraphernalia to get the exact quote for above, I also found a shirt that was off-putting to me. I do believe that prayers can avail much in our earthly fight against illness and death, but putting a pink ribbon around the cross seems very wrong. Ultimately, Jesus died to take away our sins, not for his cross to be co-opted for the cause de jour. What do you think?

Lastly, while reading a blog's comments, the subject of religion came up, and a member of the Eastern Orthodox church declared that Orthodox believe that Jesus died to destroy death, not to pay the price for our sins. Is this really what Orthodox believe? Does anyone know?
Posted by Barb the Evil Genius at 5:36 PM 7 comments: Links to this post