We Found Our Thrill 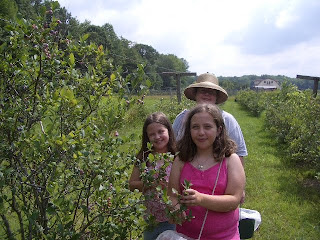 On Tuesday we went blueberry picking with the Presbytera and some of her family, and another homeschooling mom in the area. It was a great opportunity for the girls to get some of the fruit they love, at a good price, and a fun experience picking. Fortunately, the day was not overly hot or humid, and we picked quite a few pounds of berries. Wildchild has already made one batch of blueberry muffins, and the girls want to make blueberry smoothees. Many of the blueberries need to put in the freezer still. It was a very pleasant way to spend the day
Posted by Barb the Evil Genius at 10:12 PM 3 comments:

We needed to get out of the house today, so we went to the local, and annual, Irish Cultural Festival. Mr. Evil Genius bought all three of his girls some jewelry, I got to see some handsome Irish men ;), and we got to hear some Irish music and see some Irish dancing. The Scientist knew one of the Irish dancers from a sleepover party given by one of her good friends, also an Irish dancer. The two girls hung out for a while, in between performances by the girl's dance school. I bet none of you, even those who live in Ohio, have ever seen an Irish dance performed to "Hang On Sloopy." It electrified the crowd. O-H-I-O!
Posted by Barb the Evil Genius at 10:00 PM 5 comments:

My friend Debbie is having a contest and giving away some nice things if you are a quilter, or even just a sewer. I've been wanting one of those Clover mini-irons for ages; they're supposed to be great for sewing doll clothes. And the little containers are just too cute!
Posted by Barb the Evil Genius at 12:32 PM No comments:

You know what? I like ballet. Our second class was today, and once again, it was a work-out. I've never gotten into aerobics, or lying on the floor waving my legs around, but exercising by way of dance is fun. I wish I could have taken dance lessons when I was young, although I was intrigued by tap then. Perhaps Wildchild and I can continue practicing ballet together after the classes are over.
Posted by Barb the Evil Genius at 9:21 PM No comments:

While Mr. Evil Genius and I were shopping in our local Target tonight, we saw Indians pitcher Paul Byrd! I did say hi to him. Saved the squee for when we were out of the store. :) And I just mentioned something about his HGH usage today. (lopsided grin)
Posted by Barb the Evil Genius at 9:19 PM No comments:

Yesterday the family met up at Cedar Point with my sister-in-law and her husband, to celebrate my birthday, which is today. I'm starting a new decade, and it is not my thirties! We (most of us) rode lots of rides and all ate good food, which we brought from home. Mr. Evil Genius did most of the cooking! Fortunately, although we had scattered showers, the rain came around mealtime both times, so we ate lunch and dinner at our covered table and waited out the rain. We ended up having a very good time.

Here's a picture of the cake. My husband told the girl what to write on it. 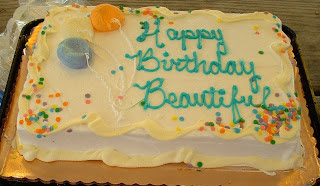 Here's the Scientist and Wildchild with local celebrities. :) 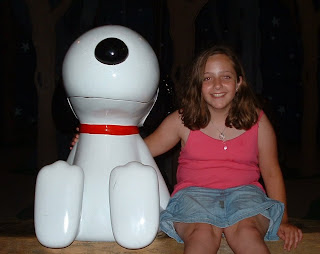 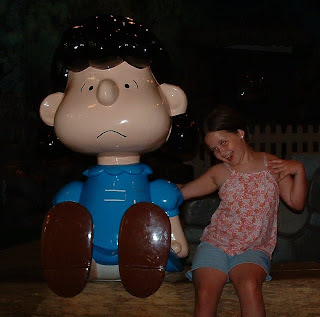 Tonight was the first Mom/Kid ballet class with Wildchild and I have discovered two things. I am old. And out of shape. After that class I was Ready.To.Drop. I don't know how Wildchild does it. She went swimming this afternoon, had a tap dancing class in the early evening, we had dinner, then ballet. And then she put her tap shoes on and was showing her sister her new tap moves when we got home! But it looks so easy when Wildchild does it!
Posted by Barb the Evil Genius at 8:57 PM 2 comments:

The Rebellious Pastor's Wife tagged me for this one. It's similar to one I did not that long ago, but I'm always up for a meme, so I'll play along.

What was I doing ten years ago?

Ten years ago I was fairly early on in my pregnancy with Wildchild. Sometime during that summer was when we had the 100-year-flood that left several feet of water in our basement and turned our street into a river. There were kids floating in a raft in the cul-de-sac directly across from our house, seriously. I'm still bitter about losing a big box of books from college that was too heavy to go on our shelves, and probably would have been on a lower shelf so I would have lost it anyway. We didn't have any trouble with that basement before or after.

That summer was also when I had an earache so bad I could barely eat or sleep, so I got Tylenol-with-codeine and then was miserably ill because I'm allergic to codeine and didn't know it. I think having a little Scientist running around, and expecting Wildchild, were the main redeeming things about that time.


What are five things on my to-do list for tomorrow?

Do laundry so I have something nice to wear to Cedar Point on Saturday.
Keep getting our school books area cleaned up so we are ready for school in August.
Exercising. I've been using the treadmill in the exercise room of our complex. I do better with that than just walking.
Continue going through paper and bills. Fun.
Knit, sew, embroider. Might just sew a new top instead of doing laundry. :)


Things I would do if I were a billionaire

Buy a nice house in the country, but not too far out.
Buy the Scientist a horse. Maybe build a stable on our land.
Buy a summer place on Lake Erie, preferably on the long strip of land by Cedar Point.
Go to Germany, to visit family and friends. Plus it would be a great way for the girls to pick up German.
Go to Italy. Check out the major cities and the little valley where my husband's people come from.
Pay for all the repair work and maintenance on our church that needs done


Places I have lived


Jobs I have had

Secretarial assistant in The President's and Dean's Office for almost four years when I was in college.
Did proofreading, worked on catalogs and did copy work at various times for my father's ad agency. Went from the days of the big old typesetting machine (which I didn't use) and photostat machine to doing everything on the computer using Adobe Page Maker.
At a clothing store when I was home from college. Does anyone remember id?
As a Department Manager at a department store.
Computer programmer for the Department of Defense. Used a dinosaur language, COBOL.
Homeschool teacher.

Again, I'm not going to tag anybody, for the same reasons I listed last time.
Posted by Barb the Evil Genius at 11:26 AM No comments:

I Miss My Husband

Over the past several months, my husband has had various health problems. First it was muscle problems in his back, which necessitated physical therapy. Then we discovered he needed more thyroid medication. However, that hasn't helped much with his general tiredness. When he's not at work, he sleeps a good bit of the time, and when he is at work, he requires lots of caffeine to keep him going. He had a sleep study done this week, which we hope will yield results that could lead to help with his tiredness. I feel badly for wishing my husband was available to do more around the house and to have fun and do things with. What if he was seriously ill or disabled? Still, I do miss really having my husband around, instead of asleep.

I hope everyone had a nice holiday yesterday. We spent the day with my in-laws and had a good time. We even got home in time to catch some local fireworks, although we enjoyed a fine display of (illegal) pyrotechnics for a good bit of our drive through Cleveland. My sister-in-law is pregnant, so I need to find lots of easy knitting patterns for baby items. :) We got to see the first "pictures" of my little nephew-or-niece-to-be yesterday.

Speaking of babies, Blonde Liz, who recently had a C-section, reminds us of one of the things to be thankful for in living in this country, which is the excellent health care. I also had a C-section, and I realized at the time, and have at intervals thereafter, that my Wildchild and I could have died under other circumstances. We also came close to losing Wildchild when she had a bad case of croup. At least, I believe so since they brought the crash cart in. It is indeed a blessing to live in a country where lives can be saved through good medical care. I hope we don't go to nationalized health care! However, Liz makes me feel woefully deficient in the catechesis of my children. I did sing Christmas carols to the Scientist, since she was born on Dec. 21st.
Posted by Barb the Evil Genius at 1:15 PM 5 comments:

Barb the Evil Genius
I've been happily married for over twenty-five years, and have two grown-up daughters. We also share our home with two black cats and two bunnies. I like to knit and sew, both clothes for my family, and clothes for my dolls. My dolls get things in modern and vintage style. I'm an amateur fashion historian, and I love to live out my vintage dreams through my dolls! I am on Instagram as enduringelegance, and on Flickr as Barb_the_Evil_Genius. I'm BarbEvilKnitter on Fiberkind, if you are a fellow knitter or crocheter. I'm trying to get some regular doll sewing done so I have something to post about on a dedicated sewing blog as well.