So This Is a Little Bit Late

In my defense, it wasn't posted on Ace of Spades until after Reformation Day either. 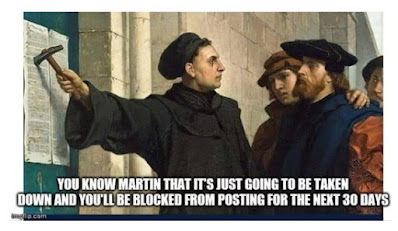 Posted by Barb the Evil Genius at 2:24 PM No comments:

A Tribute and Memorial

My pastor spoke today at the Soldier's and Sailor's Monument in downtown Cleveland, Ohio. He served as a chaplain both in Shanksville, PA, and Ground Zero, New York City. Here is the text of his address today.

Posted by Barb the Evil Genius at 4:42 PM No comments:

For decades now, I've gone to the shores of Lake Erie for enjoyment, but also when I need solace, or to think, or for cheering me up. I've been suffering from depression more lately with not being able to go everywhere I would like to, so a little over a week ago, Mr. BTEG and I hit the beach. 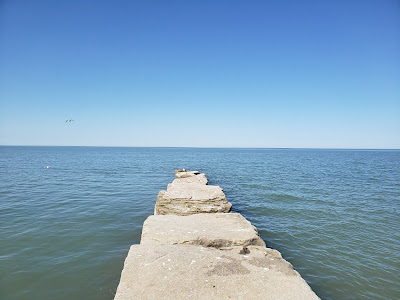 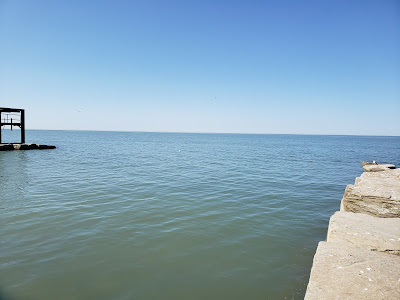 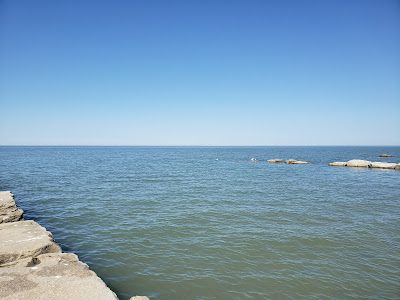 We saw one fish in the water that day, but we saw some birds come out of a dive into the water with fish in their beaks, too. 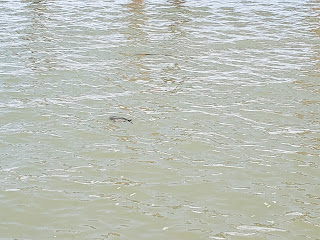 There's a creek right there that feeds into the lake. 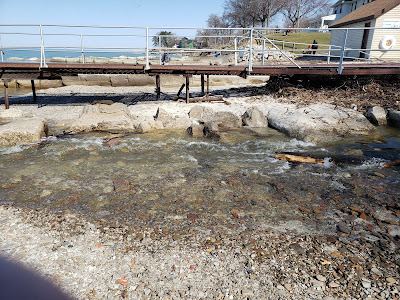 And this breakwall was partially submerged; the water level seemed rather high the day that we were there. 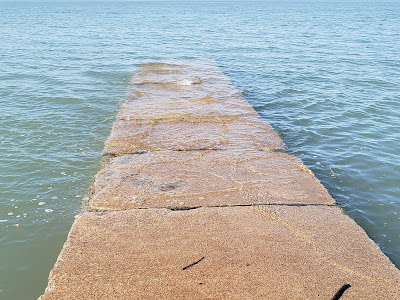 Posted by Barb the Evil Genius at 3:09 PM No comments:

Posted by Barb the Evil Genius at 6:01 PM No comments:

When in the Time of the Plague

do as the plague doctors do. 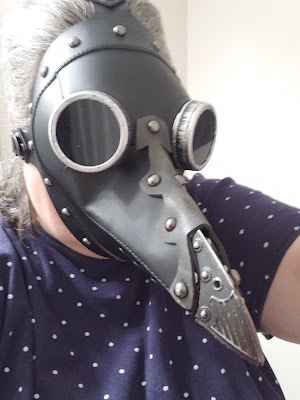 Adventures in Baby Knitting (and Other Types)

Knitting is not technically a new hobby for me. I started to learn it over ten years ago, but at the moment, I am more active in the hobby than I have been for quite a while. I've gotten discouraged in the past, because I never seem able to move beyond basic stitches. I also for the life of me still can't get a project started in the round, because I can't join that first stitch together. However, I have a bunch of projects recently completed, planned, or "on the needles" right now. If I keep up this momentum, maybe I can go on to more difficult projects.

The first thing that got me on a knitting kick was the news that one of Mr. BTEG's co-workers, and his wife, were expecting a baby. We've hung out with the couple as friends often, and we were invited to the "drive-by" baby shower. I made them a baby bib, and a washcloth. The baby's father has this thing about collecting duck items; indeed, he wore his ginormous duck slippers at the shower. So I put duck themes into the items that I knit. 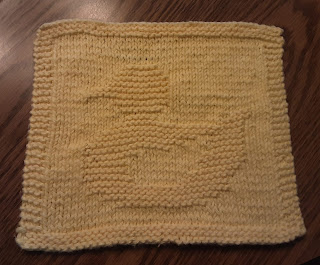 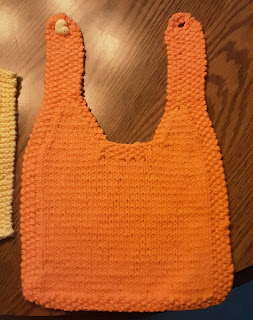 It's becoming a thing of mine to knit an orange-colored bib for new parents, because strained carrots stain things like you wouldn't believe. I would like to make another orange one for another young woman that I know who is expecting a baby, as well as a blue bib, because she's having a boy.

I made a Christmas dishcloth in red, white and green dyed yarn for a co-worker of my daughter. I may have let that one get out of the house without taking a picture of it, but there may be pictures on my camera card. If I find them, I'll put one up.

I'm working on a Barbie doll size sweater. I've had problems working with this size in the past, but so far, this project seems to be coming along okay.

I started a baby blanket as an after-baby gift for the couple that I made the duck stuff for, but the new baby is already about a month old, so who knows if I can get this blanket done in a reasonable time frame.

I'm working on an afghan for me that I think is just going to be plain old garter stitches, with some purl rows every now and then to add interest. I'm in no hurry for that one. In fact, since Mr. BTEG always likes the house cold, I can pretty much use an afghan all year round.

Lastly, I have some projects to work on that came in a kit. I got a really great deal on the kit; it's an interesting story about internet companies and branding, I think. Once upon a time, there was a website called Craftsy, which offered classes on things like quilting, sewing, knitting and crocheting, for a fee. They also offered patterns by independent designers, some which were free, some which were a small price to buy. I had a Craftsy account myself, until... someone decided to change Craftsy to Bluprint. I *think* Bluprint added some classes in other types of creative endeavors, but everything went to pay-for classes, and all the independent designers were gone. Bluprint also sold crafting kits, as you'll see. Suddenly, I see Bluprint kits for bargain prices on the webpage of one of my favorite fabric stores, and The Real Craftsy is advertising on Instagram. Yep, Bluprint has gone back to Craftsy. Even the Wayback Machine (archive.org) redirects Bluprint to Craftsy. Alas, the independent designers are still gone, and the classes that were advertised with the kit, to help me learn to knit and how to make the three projects that came with the kit, would now cost me $69.99 for the 17 sessions, 4 hour and 26 minute total set of classes. Or, I could join Craftsy for $7.99 a month, or $79.99 a year. Good thing that I already know how to knit! I may poke around the classes on the Craftsy site, but at the moment, I'm also looking at SkillShare. I signed up for a free trial with them, but I made the mistake of signing up right before Christmas, when I wasn't up to watching a lot of teaching videos. SkillShare caters to mostly different class types, but I was interested in things that were offered there as well.

Anyway, I did at least get a super good bargain on some nice knitting supplies. I paid $20 plus shipping for the kit below; I presume my fave fabric store bought all or most of the Bluprint kits for fantastic prices when Bluprint stopped being a brand. I got all the yarn and needles necessary to make the three projects, three patterns, a canvas bag, and a small case that contained the knitting needles, plus four yarn needles, a pair of scissors, and some stitch markers. The only thing that worries me is that the super bulky yarn up top is labeled as "roving." I'm pretty sure that roving yarn is yarn that hasn't been spun, and thus will fall apart after a short time of any kind of use, much less a hand wash. Roving is super popular at the moment, and I don't know why. I would think once people figured out that the item that you put some much time and/or money into, was going to fall apart after the second or third use, the roving fad would have soon been over. Never underestimate the silliness of the latest wine mom fad, I guess. 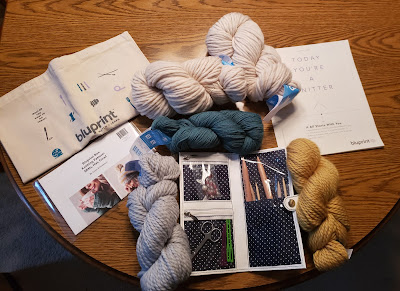 I hope you enjoyed reading this, maybe even if you're not a knitter? A gold star for you if you read this small novel, and a silver walker if you got the movie reference in my title. :)

Hello, all you dudes and dudettes! I have the feeling that it would be a good idea to be more in touch with the outside world this year, so the blogging will be picking back up (hopefully!)

By God's grace, the BTEG family is doing pretty well. The Eldest is still out on her own, now living too far away for casual visits, but we keep in touch. The Dancer, now to be known by her real name, Alex, still lives at home, and works as a pharmacy technician. Mr. BTEG is able to work from home, which is a real blessing.

As for me? I'm pursuing my many interests and trying to pick up some new skills, and that's what this blog will mostly be about, as well as some essays and rants. I run a pretty active doll collector's blog, but I'll be talking here about other things I'm working on. I don't want to share too much yet, because I'm still in the learning phase for many of my intended pursuits.

I hope that any of you still reading here are doing well. I don't expect 2021 to be a great year, but we are at Casa BTEG will be doing our best to keep moving forward.